A month or so ago, @sewdoitemma was having a stashbusting sale, and I watched with interest. It’s not been long since I joined Instagram, and I am enjoying the sense of community that comes with it – especially because I do not discuss my love for making, sewing and knitting readily with the majority of my real-life friends.

When this cotton flannel came up, I immediately fancied it, but did not need another pair of pyjamas for myself. Joey had already requested a pair of pyjama bottoms and so I asked if this fabric would fit the bill, he acquiesced and I immediately commented on the Instagram post with a “sold to me, please!” and was duly rewarded.

The interaction was swift and easy: paypal payment, acknowledgement of address and away we go. The fabric arrived beautifully washed, with a nice note of thanks and a pattern thrown into the mix. It’s sat on my shelf ever since, as sewing for Dublin took priority, but Joey has never stopped asking when his pyjama trousers were getting made, so here we are.

After struggling to find any real competition in the realms of men’s pyjamas, I decided to go with the indie darling: these are the Eastwood Pajamas (American English spelling!) from Thread Theory. Thread Theory are such a good company, and one of the few that caters mostly towards men. I’d enjoyed making the Comox Boxers, so I forsaw no problems.

I cut out a medium without making any changes. I checked the length next to an existing pair of men’s pyjama bottoms that live in our drawers and it seemed perfect. We decided on style V2 – with the faux fly front, and one patch pocket at the back, cut on the bias. Joey wasn’t fussed about having drawstring ties so overall the chosen options made it a pretty simple make.

The pyjamas came together very nicely indeed. I thought the pocket holes were going to be tiny, but I think they’re okay, just… The back pocket grainline seems to be ‘off’ as it’s not parallel with the side seams of the pattern piece, something I wish I’d just self-corrected, but at that time I was thinking it would right itself. And, interestingly, I think it is actually correct – it sits perfectly once it’s on the trousers.

One instruction confused me, and that was to add bias binding to finish the bottom seam of the waistband. This would then be sewn with the bias binding hanging down, and the 1.5″ elastic within the turned over main fabric. I pinned the bias binding in place (hadn’t made my own), only to realise that it was going to be all crumbled once the waistband had the elastic put through: why have binding there in the first place? Why not finish the waistband with a turned edge instead? I suppose if you were making the binding out of self-fabric it would be softer, but I couldn’t see the point in it, so just left it off. I came to the conclusion that a turned seam would be much neater, have less bulk and be a hang of a lot less work and indeed on both pyjamas it turned out perfectly. I cannot see the benefit of bias binding at all.

Just when I was nearing the finishing line, I broke my last needle sewing the elastic. Luckily I found another not-quite blunt one and it got me through the last wee bit. I’d ordered some Schmetz needles for a change, and found them to be incredible (ridiculously) breakable. Once that last one broke, I immediately ordered some of my beloved Klasse again – it’ll be the last foray into another brand for a good while.

Joey loves the finished bottoms and wears them often in the evening as we’re relaxing. They’re also perfect first-thing-in-the-morning trousers as he’s not normally a pyjama wearer. The fabric is super soft and has washed really well. A win! 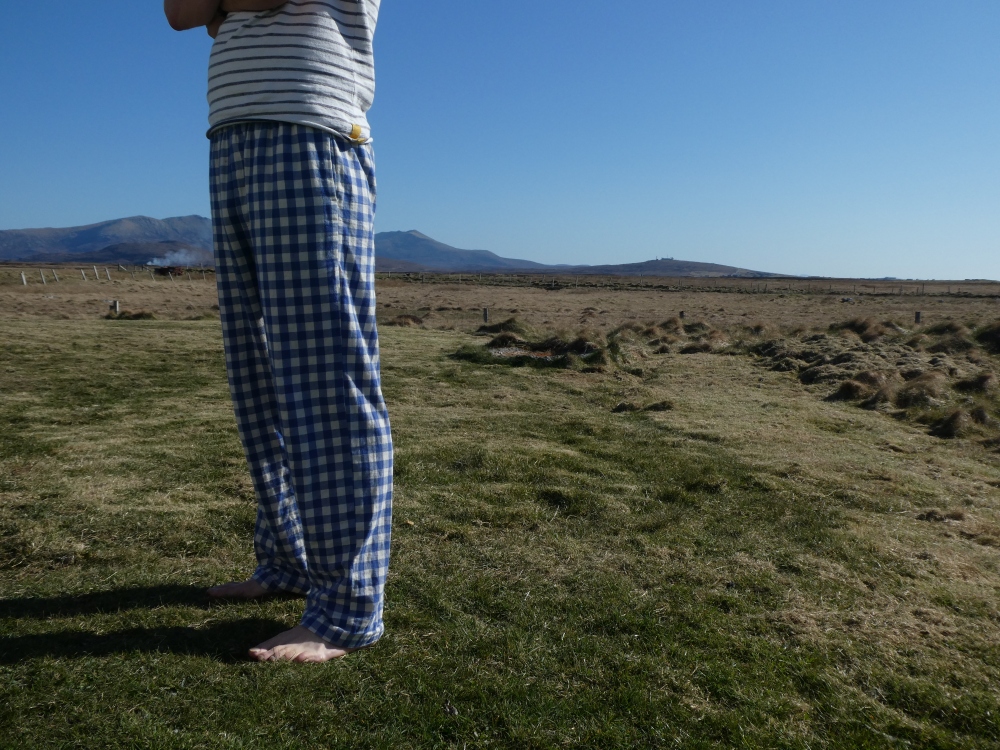 About five minutes after I finished them, I asked my brother if he’d like a pair for his birthday. He said that that would be great, so I started searching for a fabric. I found the perfect stuff on Etsy, from a shop based in Northern Ireland: Oh Sew! The delivery was prompt, and by this time we were deep in lockdown, so I was especially appreciative of the delivery. The brushed cotton fabric is thicker than Joey’s, so they’ll be slightly cosier, but hopefully put to good use nevertheless. The colouration is lovely, although I did find that the plaid was almost impossible to get to lie straight widthways, and I did not have enough to be choosier about how I cut out (I had 2.5m), so the plaid lies unevenly as shown in the photo below. Due to the thickness of the fabric, they’re quite unseasonal as a gift, but never mind: they’ll wait for next winter if need be, and here in Scotland we could still get some very chilly evenings!

The pyjamas came together super quickly. I cut out the pattern while on the phone to my mum (she said the sound of the scissors cutting was lovely – she knows all the right things to say!!) and started sewing that evening. To try and fix the pocket problem, I increased the gap by 2cm – this seems to have done the trick so we’ll see what my brother thinks.

When I’d ordered new needles from Minerva after finishing Joey’s pair, I’d also popped three different colours of twill tape in with the order with the intention of adding drawstring ties to this pair. When it came to adding this detail I realised that I hadn’t ordered enough twill tape to go right around the waist, so I cut it in half and attached it at each side seam. I chose the red tape, and it’s perfect (I think) – it adds a really nice detail, and as they are free-floating with the waistband (apart from the fixing at the side seams), they are functional – important as I was guessing my brother’s measurements. As a finishing touch, I also topstitched the elastic at top and bottom as Joey found his started to twist (I’ve retrospectively topstitched his too). And they were done. His birthday was yesterday and he really likes the pyjamas and says that they fit well and are comfy! I call that another win for the Eastwoods.

Overall, I have really enjoyed making these pyjama bottoms, my second pair are better than my first and I have ideas as to how to make the next ones even more spectacular, but that’ll wait for my next make, which will probably be another gift. Now, who fancies a pair of pj’s?

Have you made pyjamas for a man? What pattern did you use and would you recommend it? 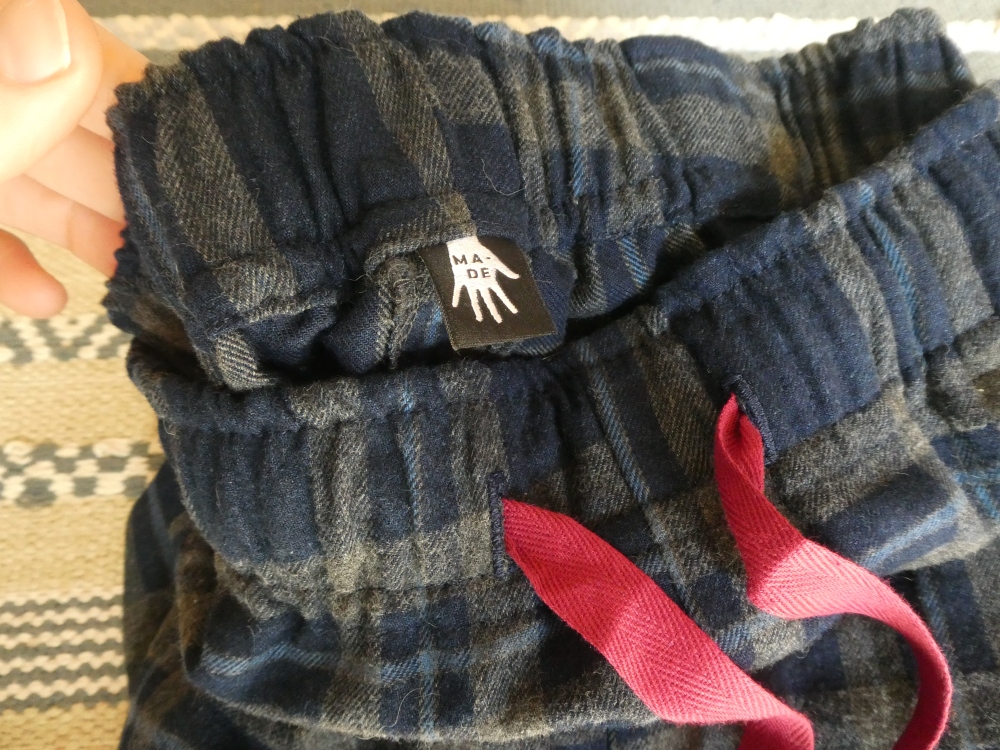